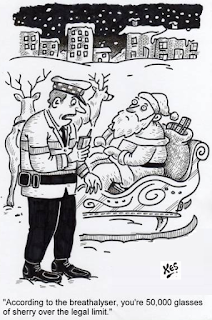 I've always said 'give credit where it's due', which explains why I am reporting the surprising news that a Tory minister has actually been heard to talk sense.


Chris Grayling, Secretary of State for Transport, has ruled out lowering the drink-driving limit because government policy is not about "people who had a glass of wine at the pub", but is about "people who systematically flout the law". I've made the point here several times before that, while I don't approve of driving while over the limit, merely reducing the limit is a cheap and easy way of appearing to be strict while doing nothing whatsoever: the idiots who have a skinful before driving will take no more notice of a lower limit than they do of the present one.

With the reductions in police numbers and traffic patrols increasingly being replaced by speeding cameras and CCTV, there is a real possibility that we are making it easier for drunks behind the wheel to get away with flouting the law, and putting the rest of us at risk in the process. Grayling makes a similar point: "We have a fairly thinly stretched police force and we should concentrate on catching the serious offenders."

The Institute of Alcohol Studies, which is lobbying for a cut in the limit, says that the minister is "out of touch", but I have yet to read proposals by any alcohol campaigners that make positive and realistic suggestions as to how we tackle those who blatantly ignore the drink-drive limit. So who's out of touch?

Passing a law relating to drink-driving is easy, whereas implementing it is not. Lowering the limit will do nothing to stop persistent drunk drivers, who'd just as happily ignore a limit of zero. It would simply penalise drivers who carefully stay within the current limit, i.e. the very people who are not the problem.
Posted by Neville Grundy at 6:36 pm