Jackie Oates ~ from the Bothy to the Phil 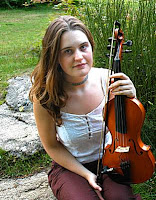 On 28th June, the Bothy Folk Club featured Jackie Oates accompanied by guitarist James Dumbleton. Jackie is a young fiddle-singer whose material is mostly traditional and her playing and singing certainly wooed the Bothy audience, who know a thing or two about good music. I had the pleasure of putting these two young people up for the night and they were unassuming and good company ~ no airs and graces, and long may it stay so.

I have noticed that Jackie has a gig in the Rodewald Suite of the prestigious Liverpool Philharmonic Hall on 17th October. The admission charge of £10 is modest by Phil standards, but almost double what the Bothy charged. I fear that this very talented and endearing performer may become unaffordable for our local folk club, especially if her career follows the well-trodden path blazed by Kathryn Tickell and Kate Rusby. Kate has also appeared at the Bothy ~ before folk stardom beckoned.

Incidentally, if you fancy giving the Bothy a go, the beer is usually Thwaites Bomber, although at present it's Thwaites Wainwright.
Posted by Neville Grundy at 10:57 am