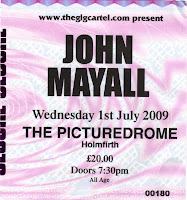 Yesterday found four of us in a car heading to the Picturedrome in Holmfirth to see British blues legend, John Mayall. We first went into the Old Bridge Hotel next to the venue for some food and drink; Copper Dragon, Timothy Taylor's Best and Summer Wine Brewery Teleporter (5%) were a welcome sight. While we were there, the man himself with two of his band also came in for something to eat.


The venue is a former cinema as the name suggests with acceptable Taylor's Landlord on hand pump; it's a welcome change for a rock venue to have real ale. First up was a group from the Manchester area called Tantrum playing energetic blues rock at full tilt. They are an enthusiastic three piece (drums, bass, guitar), well worth seeing if you get the chance.

Then came the headliner: John Mayall announced his first song as one he had learned from Sonny Boy Williamson ~ high class name dropping. He also did songs by other blues greats, such as Freddy King and Albert King, as well as many of his own. His band are all Americans (and they all look less than half of his age) but still managed to produce that British blues sound, sometimes organ-driven, for which Mayall has been renowned for since the 1960s. As is always the case in John Mayall bands, they are all excellent musicians.

As I listened to one of his own songs, I was thinking that it quite experimental. It went down a storm, and Mayall said delightedly, "I thought that might be too jazzy for you guys." Another song was written after Mayall had dreamt about the blues greats and made a dreamy blue song out of it, complete with references to Robert Johnson and others. I was left thinking how versatile the blues format can be.

During the evening, Mayall played keyboard, guitar and a lot of blues harp. By the end, the crowd were shouting for more, and two encores ensued; for the second Mayall was on his own with just a keyboard. Technical problems caused him to disconnect the microphone and encourage the crowd to sing the chorus while he played. Audience participation thus took the night out.

Mayall is now 75, but played with unflagging enthusiasm and energy; there is no doubt he was thoroughly enjoying himself, as was the crowd, which included many who were too young to remember the Bluesbreakers in the 60s. Highly recommended.