Mandatory Code for (i.e. against) Pubs 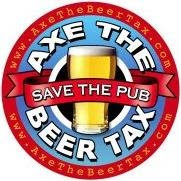 The Government is proposing a new, costly, bureaucratic, mandatory code for pubs to cut down on "irresponsible" drinking and anti-social behaviour. Although I go to pubs several times per week, it's so long since I saw any alcohol-fuelled trouble - or even well-behaved extreme drunkenness - in a pub that I can't remember when or where it was. Funny that, isn't it? I really must lead a sheltered life.

If only the Government had shown the same determination to impose a fierce mandatory code upon our financial industry instead of the "light touch" (i.e. zero) regulation that it preferred, then Britain would not be in the financial mess it is now. Micro-managing our lives is not the job of politicians, but it is their job to look after our nation's finances, a task in which they have signally failed (except when those finances funded their expenses claims, of course ~ they can get things right when it suits them ... and don't get me started again on how we taxpayers pay for their cut price booze).

There is a Government consultation out now and the Axe The Beer Tax Campaign has made it very easy for you to put in your two penn'orth: reply to the consultation and lobby your MP at the same time by clicking on enough is enough. The deadline for responses is 5th August, so best not to leave it till later.
Posted by Neville Grundy at 2:42 pm