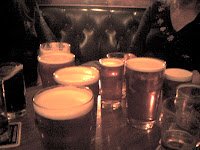 The Daily Telegraph, not my favourite read, has recently pronounced:

“New research published in the journal Alcoholism: Clinical & Experimental Research suggests that clusters of rural pubs are linked to poor mental health of local residents and an increased risk that they will commit suicide. The team behind the study of suicides and attempted suicides in rural communities across California between 1995 and 2000 even suggested that people should take into account the number of places which sell alcohol near their home when they consider moving to the country. Researchers said that there was a strong association between public houses and the risk that people would go on to take their own lives.”
Now, living in the country in the USA is entirely different than over here. Over there, small communities can be 50 miles apart, which is certainly not true of England. I can well imagine that such isolation can lead to alcoholism and depression, whereas here in little England, a big town or city is not usually very far away and people are therefore less likely to feel so isolated. Our country pubs tend to be a focus for communities, not an escape from tedium.
I'm just concerned that the anti-drink brigade will seize on this research and indiscriminately misuse it for their own ends.
Posted by Neville Grundy at 1:50 pm