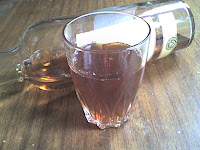 As most people will know, there are people in society who delight in telling others how to live their lives. Having achieved the smoking ban, which I broadly support, they have turned their attention to alcohol. The British Medical Association (BMA) proposes for alcohol: above inflation tax increases, minimum pricing, reduction in opening hours and a ban on advertising. The BMA's Dr Vivienne Nathanson stated: "As doctors our focus is to ensure individuals drink sensibly." Since when? I thought the focus of doctors is treat people's ill health and not to "ensure" we drink in a manner they approve of. Like most people, I certainly don't have a problem with campaigns to encourage healthy living, but healthy living cannot be imposed by punitive tax and social measures. I understand the principle that prevention is better than cure, but people have to be persuaded, not coerced, a point the BMA has failed to grasp.
In the 28 years I worked for the DSS, most of my jobs involved dealing with the public, which included quite a few alcoholics. In the worst cases, clothes would be in tatters, they ate the cheapest food available, when they ate at all, and their benefits went on extra strong lager or cider. I became used to interviewing people who were drunk and reeking of booze at 10 o' clock in the morning when they'd come in for crisis loans to replace their spent benefit. The point is that what they spent on booze was very high proportion of their benefits, money they should have used for necessities, but that didn't stop these problem drinkers from drinking. No, they simply stopped eating properly and failed to pay bills, all of which contributed to their downward spiral. One of the saddest cases I recall was an inoffensive boozer who was found dead one morning in the staff car park; we assumed he had been waiting for the office to open.

Increasing taxation will only penalise the majority of responsible drinkers and drive pubs out of business. It will not constrain problem drinkers, who in the worst cases have ceased to care about anything except where the next drink is coming from.
There's an old phrase, "Physician, heal thyself." We recently learned that on average, medical professionals drink above the recommended guidelines. If the BMA can't convince its own, they've little chance of convincing social drinkers. If you're following a failing strategy, you should rethink it. The problem is that the government may seize on these ideas to justify or even increase the existing beer tax escalator, irrespective of the deficiencies in the BMA's arguments.
Posted by Neville Grundy at 1:51 pm