How much beer tax do you pay? 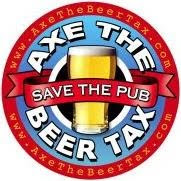 Ever wondered how much tax you pay for the right to enjoy drinking our national drink? Well now you can find out. The Axe The Beer Tax campaign has produced a handy ready reckoner that will tell you exactly how much you are being financially punished for enjoying a perfectly legal activity by a hypocritical political class whose motto is "do as I say, not as I do."

In March I wrote how we taxpayers subsidised politicians boozing with a subsidy of £5.5 million of taxpayers’ money in the 2007/8 financial year. This figure rose to over £6 million in the following year. It is politically corrupt that they are taxing beer beyond the reach of ordinary decent drinkers while at the same time themselves boozing cheaply at our expense. They are worse than the drunk in the pub who scrounges pints without ever buying one back ~ at least he doesn't preach about the evils of drink while sponging off you. With the recent expenses scandals, you'd think they might have learned something, but obviously not.

So if you agree, sign up to the Axe The Beer Tax campaign.
Posted by Neville Grundy at 2:06 am