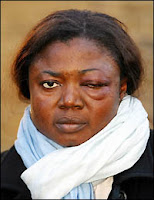 I noticed on the AOL home page a headline "Cheryl Cole dazzles with costume changes".  As I loathe this talentless, violent woman, I clicked on the review of her gig at the O2.  The whole item described her costume changes, without a single word about her singing. This is just as well, because I heard her solo single Parachute on the radio recently and was unimpressed by her thin weedy voice and the utterly stupid lyrics. If her voice sounds that bad despite all the studio wizardry that's now available (they can even correct out-of-tune singing), then it must be dire indeed. I personally know some knock-out female singers in various styles - rock, folk or cabaret - who could wipe the floor with Cole.
The picture shows Cole's victim, toilet attendant Sophie Amogbokpa, to whom she has yet to apologise seven years after attacking her. Cole didn't have even the slightest scratch to justify her plea of self-defence.  Interestingly some of the readers' comments about the article were similar to mine, showing that not everyone is persuaded that Cole is the nation's sweetheart, as much of the media would have us believe.
I nearly forgot: the costumes looked pretty stupid too, and about as alluring as a Barbie doll..
Posted by Neville Grundy at 4:31 pm