Day of the Swords 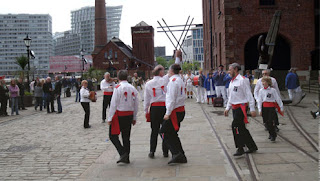 It's been a mixed week: helping set up the Spring Beer Festival and finalising the copy of Ale & Hearty, the local CAMRA magazine, which is now at the printers. It's my first as editor, so I'm hoping it will be okay. I wasn't able to work or drink at the beer festival as I was away on both days it was on: Friday in Derbyshire meeting an old friend and Saturday in Liverpool helping at the Southport Swords Day of Dance.
Morris dancing isn't a common sight in Liverpool, and each venue where the dancing was taking place attracted interested crowds. Some didn't even know that this is part of our own heritage, with one woman asking me whether they came from Holland. I also had to explain a few times that the face-blacking that some teams do (most notably Border Morris teams) has nothing to do with race and everything to do with disguise (I discussed this fact in more detail in a previous posting). The level of interest that these displays attracted belies the stereotype of English folk dance being a national embarrassment.
Afterwards to the pub ~ specifically the Dispensary in Renshaw Street, which was full of various kinds of morris dancers, male and female, young and old, and where spontaneous dances involving people from different teams occurred. I've noticed folk dancers like to do this. The beer was good, too: I was on Kelham Island Pale Rider, 5.2% ~ "its sweetness and bitterness continued to the finish" (GBG 2005).

Although I'm not a dancer myself, I enjoyed the day. To cap it all, the sun shone on the righteous.

The picture shows the Southport Swords with their swords held aloft in a swordlock by the Pump House pub on Liverpool's waterfront.
Posted by Neville Grundy at 5:34 pm