The Southport beer festival (details here) opens at 6.00 p.m. tomorrow and early in the evening, the CAMRA Southport & West Lancs Branch will be making its annual wards. These are: 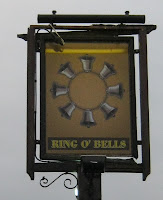