The Baum: Greater Manchester Pub Of The Year 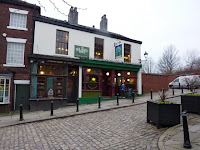 CAMRA’s Greater Manchester Pub Of The Year 2012 is The Baum, Toad Lane, Rochdale. Runner up in the competition was Costello's Bar on Goose Green, Altrincham with the White Lion in Leigh coming third.


The Baum is run by husband and wife Simon and Heidi Crompton whose team includes other members of their family. The pub is therefore family run and aims to have a strong community focus. To that end, they welcome a wide variety of customers into their pub: office workers popping in for a drink after work, shoppers calling in for a meal or real ale fans trying one of the changing range of cask ales and ciders. There is always at least one beer from a local brewery and the ingredients for their meals are locally sourced.

The pub is on a small cobbled street on the north side of the town, next to the original Co-op store which is now the Pioneers Museum charting the birth of the Cooperative movement. The pub opened around 30 years ago in a building that was previously an ironmonger’s called Morris's, taking over the building next door a few years later, and in 2010 building a large conservatory to the rear. Simon began working at The Baum in 1993, becoming owner in 2005, just as the couple's first child was born.