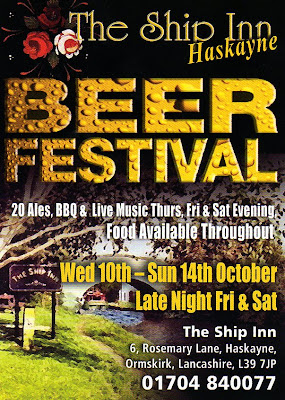 I heard of this beer festival only this afternoon; it runs from next Wednesday until Sunday. The Ship always has real ales on and today they were serving Burscough Mere Blonde, Coastal Hop Monster, Greene King IPA Gold (far better than their ordinary IPA) and Holt's Bitter.

The Ship Inn is an attractive, canalside pub in Haskayne, and is popular for its food as well as its beer. It hold two open mike nights each week on Tuesdays and Fridays.
Posted by Neville Grundy at 7:28 pm