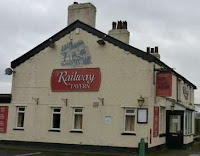 Regrettably, it's looking certain that the Railway Tavern in Hoscar will not reopen. The pub has been struggling for a while, despite being situated next to Hoscar station on the Wigan to Southport line. It had been a reliable real ale pub for quite a few years, with the Spring 2012 edition of Ale & Hearty reporting that it was selling Thwaites Wainwright and Greene King IPA, but at the same time stating that it was struggling to keep its head above water. On an earlier visit, the beers were Tetley Bitter and Black Sheep.

CAMRA opposed planning permission to redevelop the pub into residential accommodation, but their objections were overruled, so that is pretty much that. The pub dates back to the 1850s when it originally provided food and lodgings for the workers on the Wigan to Southport line. It was out in the sticks, really, with few houses nearby and just a bit too far away from Burscough to get much trade from there. While it was a cosy pub and popular with its regulars, there simply weren't enough of them to keep it going. I did anticipate that it might not last when I wrote about it after I had visited in February last year. Unfortunately I was right and we've lost another country pub in our area forever.
Posted by Neville Grundy at 1:43 pm