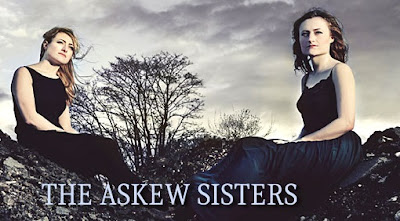 The guests at the Bothy Folk Club thus Sunday 18 October are the highly talented Askew Sisters, Hazel and Emily. "[They] are fast becoming one of the most popular and respected duos on the English folk scene. From dark ballads to uplifting dance tunes, they play with driving energy and the unity of two people who have played together all their lives. The sisters use fiddle, melodeon and concertina to breathtaking effect, creating cinematic arrangements that get to the very heart of each song. These create a perfect setting for Hazel’s striking voice, which won her Best Female Singer at the Spiral Earth Awards 2011."

"Inspired arrangements of traditional music, striking versions of tricky ballads – this is traditional folk in a fine, fresh form." - The Telegraph

"An album of singular and iconic beauty." - FolkWords

" Vocals shimmering above fiddles, viola, melodeons and concertina, [this album] casts its spell." - The Sunday Times

"The edgy alchemy of melodeon and fiddle makes for a vivid and revitalising sound throughout… one of the most atmospheric and erudite albums you’ll hear this year and a model of consummate taste." - EDS

The Bothy meets at the Park Golf Club, Park Road West, Southport, PR9 0JS. Tickets on-line, or on the door. This will probably be a popular night, so best not arrive too late. The venue sells real ale from Southport Brewery.
Posted by Neville Grundy at 2:57 pm