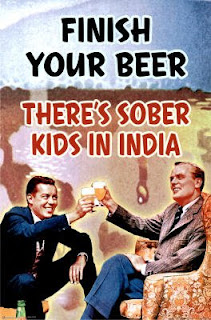 I was in the Mount Pleasant in Southport with some friends last night watching local rock band Fag Ash Lil put on a great show as usual. The pub was quite busy, probably not as busy as it would have been had the Southport Musical Fireworks Championships not been on.

At some time during the evening, a group of young lads walked out of the pub, leaving four pints of lager and cider on the table: one untouched, two with no more than one sip taken, and one more than half full. At closing time a couple of hours later, the bar staff removed them and poured them away. I estimated that about £12's worth of drink went down the drain.

I've periodically noticed this kind of behaviour before: certain groups of people, usually young, will suddenly decide to go and, instead of drinking up, just walk away. In the Sir Henry Segrave a couple of months ago, there was a large group consisting of a couple of dozen males, mostly young, who did exactly the same thing, except on that occasion there were probably about 18-20 abandoned drinks.

Leaving beer is not something I've ever been in the habit of doing, nor people I know. I can only assume they've got more money than sense.
Posted by Neville Grundy at 7:06 pm