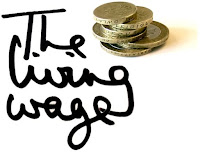 I've just read an article in the Morning Advertiser by William Lees-Jones of the Middleton brewery, JW Lees, suggesting that the National Living Wage (currently £9.15 in London and £7.85 elsewhere) will close pubs. I don't usually take much notice of economic apocalypse predicted by capitalist companies when they are forced to implement social or welfare measures, or - as I prefer to think of it - are required to face up to their social responsibilities, seeing that the doom and gloom they anticipate rarely materialises. Is this situation any different?

I think it might well be. The gradual introduction of the Living Wage over the next five years is coupled with immediate cuts in tax credits. I have long thought that the state shouldn't be subsidising low wages, currently with tax credits, and previously with Family Income Supplement and then Family Credit. However, it has been the policy of both Tory and Labour governments in the last 35 to 40 years to cultivate a low wage economy to make us "more competitive". It's a typical British response: countries like Germany and Japan modernised their industries to improve the products and make them more attractive to customers. We just tried to cut costs. That is why in the 1970s British Leyland was selling mostly unattractive-looking cars with 1950s engines. The same applied to the brewing industry: the 1970s was a terrible time for beer as companies tried to get us to drink mass produced, low quality national brands.

Our motor industry is now mostly foreign owned, but our brewing situation has - against the flow of the tide of British industry - improved beyond recognition, although that has little to do with the industry as it was. The Beer Orders of 1989 liberated brewing by causing the national brewers to shed their massive tied estates, thereby creating a bigger market for small new brewers. Unfortunately, they also led to the parlous situation that many of our pubs are now in, the reasons for which I've covered many times previously, although the huge debts of pub companies must take much of the blame.

The government is transferring responsibility for dealing with low wages from itself to employers. In principle I agree with this, but their motive is not any concern for employees, but simply to save money. This is demonstrated by the gap between the ending of tax credits and the full implementation of the Living Wage, which will undoubtedly cause hardship. You cannot overturn decades of government policy relating to a low age economy within a single parliament: the more quickly you introduce major changes, the higher the chance of unintended consequences. Just as the removal of tax credits without any immediate replacement may drive many workers into further poverty, the requirement to pay the Living Wage may drive pubs that are just about holding on into deficit. Consequently, I think William Lees-Jones may just have a point to some extent, although I feel that his pronouncements are still partly derived from the usual business habit of crying wolf about increased costs.

An increased level of pub closures is not inevitable: the industry's call for a lower level of VAT for the hospitality industry and cuts in alcohol duty could help pubs deal with the extra cost of the Living Wage, but I see no sign of any of that happening. The government's strategy is high risk, not just to pubs. Time will show how risky, but some casualties do seem quite likely. Regrettably, this may include some pubs.
Posted by Neville Grundy at 1:38 pm