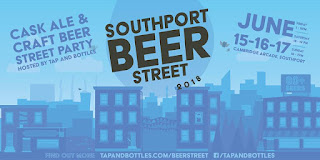 The Beer Street festival returns to Southport town centre from Friday 15 to Sunday 17 June. Described as a "Cask Ale & Craft Beer Street Party", it will be once again hosted by the Tap & Bottles, Cambridge Arcade, Southport, close to Lord Street and the railway station.

They're hoping to build on last year's success by providing a huge selection of more than 80 cask ales, keg beers and ciders, including special collaborations and one-off brews. The festival will extend into the Arcade, which is covered so you won't need your brolly. More information here.
Posted by Neville Grundy at 4:10 am

Email ThisBlogThis!Share to TwitterShare to FacebookShare to Pinterest
Labels: beer festival, What's on