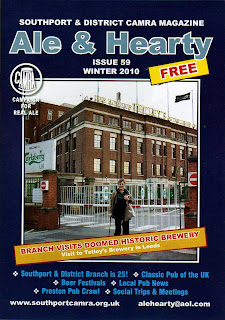 The Winter issue of our local CAMRA magazine Ale & Hearty, the third that I have edited, has recently been published. I am now learning the problems of taking on such a venture. People promise articles that don't turn up, so you have to write things at short notice to plug the gap. What I sometimes do is raid this blog to see if there is anything that I can adapt (there usually is); on the other hand, I have used in this blog one or two articles I wrote for A&H, but only after the mag is published. I don't think there is much overlap of readers, but if it was written for the mag, that's where it should appear first.
When taking over, I was warned against using pictures of local pubs on the cover, otherwise other licensees begin asking why it wasn't their pub. This at first seemed a strange constraint on a CAMRA publication, but I soon twigged that pictures of pubs aren't excluded: licensees that advertise with us put pictures of their pubs in their own adverts, so you can still see the range of good looking pubs in this area in every edition, and all of them pubs whose support helps keep the mag going. This can however make the question of what to put on the cover difficult. I had an idea last night in the Guest House while supping Everards Sleighbell: have pictures of views from pubs. With the range of pubs in our area - town centre, suburban, country, canalside, even seaside - that should keep me in cover pictures for a while.

So what have I changed since taking over? It's now officially a magazine, not a newsletter, and the title is in a much simpler and bolder font. I have ditched the Southport coat of arms, as we now cover most of West Lancashire and Formby as well as Southport. The political content (in relation to pub and beer related matters) is more overt ~ as a former union rep, I'm used to giving it straight. I've begun a couple of new series, such as pub crawls easily accessible by public transport, and relics of old breweries in pubs, and my friends Carole and Ian (aka Ale Ian), have written cheerful items about their beery adventures elsewhere in England. My articles on Real Ale & Real Music in pubs began under the previous editor Mike Hoey's stewardship. Old regular features still appear, such as Dave Williams' Classic Pubs of the UK and A. L. Guzzler's humorous view of the world. So it's not all change.

I was quite pleased with my article on a trip to Tetley's brewery in Leeds that we went on in November; as you'll know, the brewery will close next year. I went on the trip, despite not liking Tetley's much (although you wouldn't know that from the article) because it is a shame such an historical brewery, founded in 1822, is closing. I decided a photo of the brewery featuring CAMRA Branch stalwart, Mike Perkins who himself hails from Leeds, was a perfect cover picture. It was a very interesting day, with some nice pints in Keighley on the way back.

Now I'd better begin thinking about the Spring edition. It seems like back to square one each time!
Posted by Neville Grundy at 4:31 pm