It was 30 years ago today 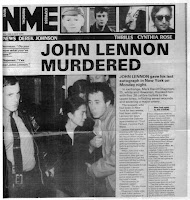 As I'm sure everyone will know, today is the 30th anniversary of the shooting of John Lennon. It wasn't the first time our generation had lost one of its heroes; we'd also lost Jimi Hendrix, Janis Joplin, Mick Taylor, Sandy Denny, Keith Moon and Gram Parsons, just to name a few, but none had been murdered - that's why Lennon's death was such a shock. When we learned the reason, it was even worse: the killer simply wanted to be famous, to be someone. This is surely the nasty side of the coin of craving fame for its own sake, devoid of any real achievements. Compared to now, celebrity culture was in its infancy in 1980, but even then a nonentity was so desperate for fame that he decided to kill one of the most famous musicians on the planet.
I heard the news on Radio 1 just as I was about to get up to go to work. I couldn't take it in and didn't get up for another hour; I only just got to work on time. Our office at the time had a lot of staff in their teens and twenties, and Sue, who worked on the section nearest the door, said sadly as I walked in, "They'll never get back together now, will they?" Another friend - not particularly a Beatles fan - told me that when his wife said that Lennon was dead, he wasn't surprised, assuming a drug overdose, but was stunned to hear it was murder. One very young woman, a massive Beatles fan, was in uncontrollable tears and had to be sent home. And so it went on throughout the day.
It seems strange to reflect now on the impact that piece of news had, completely disproportionate when you think of the innumerable tragedies caused by wars, massacres and natural disasters since then. It must be that for many of us it was an awful end to an important and formative part of our childhood, combined with complete incomprehension as to why anyone would want to murder a Beatle.
Posted by Neville Grundy at 12:54 am