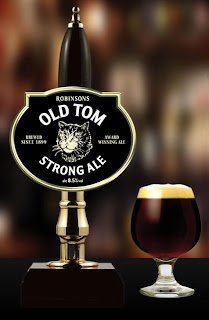 It’s the time of year when pubs begin stocking winter warmers and Christmas ales, many with witty seasonal names and novelty pump clips. I don’t mind that as it all adds to the seasonal atmosphere. The idea of brewing beers specifically for Christmas is a relatively recent one, and it’s mostly microbrewers or regional brewers who produce them. It’s harder for the large brewers to produce beers in small batches, as they’re not really set up for it.
It seems to me that some brewers simply tweak one of their normal brews and give them a seasonal name to sell as Christmas ales. These can be pleasant enough, but don’t taste particularly seasonal. Others do make special beers, either in terms of the strength and full-bodied character needed for a true winter ale, or in the flavour: at the extreme, they can taste like liquidised Christmas pudding, fine for a pint or two, but not beers you can drink all night. Spices are sometimes added to Christmas beers to give them that seasonal flavour, with cinnamon and ginger being particularly popular. Others go down the winter warmer path, producing stronger, dark beers, sweet and with a bit of body. A winter ale shouldn’t really be thin.

Winter warmers go back a long while. Beers were brewed to celebrate the winter solstice in pagan times and monasteries used to brew special beers to honour the birth of Christ, but that tends not to be the motive nowadays. The idea is that a strong dark beer warms you in winter, whereas in summer, you want to slake your thirst in the warm weather with lots of less strong, light summer ales. The first winter warmer I ever had was in the Old Ship in Eastbank Street, Southport; it was brewed in the 1980s by Walkers of Warrington, was dark, quite sweet, and around 6%. The brewery recommended serving it in halves (at 60p a half, as I recall), but we in the Old Ship were made of sterner stuff and insisted on pints. Some beers in the winter warmer style are sold all year round, such as Theakstons Old Peculier (5.6%) and Robinson’s Old Tom, which is a toe-curling 8.5%, which I once drank all afternoon and then completely lost the evening. My favourite winter ale last year came from regional brewer, Thwaites, called Good Elf and was a fairly sweet 4.9% mild with a touch of spice, very easy to drink.

It’s difficult to list these beers, because some are brewed for just one season, then the following year the brewer tries something different, but you’ll have no trouble spotting them, as there seem to be more every year. This year, our own Southport Brewery is producing Old Shrimper, which is 5.5%, rich, dark and fruity - a real winter warmer - and Santa’s Brew, 4.2%; worth keeping an eye out for them again this winter. Come on pub companies and pubs: order local beers, and reduce your carbon dray print!

It’s fun trying the various Christmas and winter ales that come out. Enjoy your Christmas and stave off the winter cold with these special beers. A pint of good winter warmer with friends in a cosy pub when it’s cold outside is a fine way to spend an evening, and the way the weather's been recently, we need them more than ever.

For a great range of winter ales, go to CAMRA's National Winter Ales Festival in Manchester from 19 to 22 January.
Posted by Neville Grundy at 4:04 pm