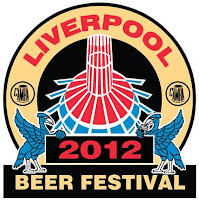 If you want to go to Liverpool Beer Festival (16 - 18 February), you need to have your wits about you. There are postal applications with different rules for members of Liverpool Branch, members of other Branches and non-members, and there is the allocation for those who work the festival. Finally, there’s the famous queuing for tickets on a freezing December morning.
I’ve often said that some CAMRA members are wannabe civil servants – they love to make things really bureaucratic.  Think of any CAMRA beer festival: very often, you pay your admission here, then get you glass there, and the beer tokens are on sale on the far wall in the main room.  Some festivals have you queuing three times before you sip your first pint.  For Liverpool, add in the fact that actually obtaining your tickets is a bureaucracy of Byzantine proportions.  It takes more than 800 words on the webpage just to explain how to buy tickets; click here to see.  I used to work for the DSS and, as I recall, none of its systems were as convoluted as this.
The webpage includes a Q&A bit that doesn’t always answer the question. For example:
Q)  Why can’t we buy tickets online?
A)  We are looking into this method. However it is complicated, due to the fact that we have to limit tickets and need to facilitate a members presale. We are however hoping to be able to offer this next year.

Nonsense, it’s not complicated.  The festival webpage says that they are holding back at least 200 tickets per session for sale at the public sale day, which this year is on 10 December at the Catholic Cathedral.  Why not scrap the public sale day and just put those 200+ tickets on line? You’re not obliged to put all the tickets for your event on-line: just the number you want to.  I’ve set up an on-line ticket system myself, and I know that it’s very easy, very quick and free to the organiser, with the additional benefit that people who live further away might have a chance of getting in.  Perhaps you're wondering how this service is funded:  the on-line ticket company charges the customer 10% extra (with a 50p minimum). A £7 ticket would cost £7.70, and that 70p is considerably less than the bus or train fares into Liverpool city centre.

I look forward to next year with interest to see how the festival copes with the technology of on-line ticketing.

The FAQ also has the surly note:  “If you have further suggestions for next year, please consider becoming part of the festival working group.”  In other words, they won’t accept suggestions or criticisms from outside the inner sanctum.  Fair enough, it’s their festival after all, but that won’t stop people having an opinion, and I know I’m definitely not alone in mine.

If you’re going to the public sale day, wrap up well and good luck!
Posted by Neville Grundy at 8:14 pm