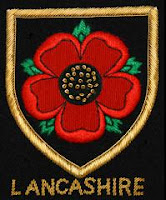 Lancashire Day is held on 27 November to commemorate the day in 1295 when the first representatives from Lancashire were summoned by Edward I to attend parliament at Westminster.  Southport was part of Lancashire until local government reorganisation in 1974, but many Southport people still consider themselves to be Lancastrians.  To celebrate the town's Lancashire connections, several local hostelries are putting on various events.  There's a lot of fun (and decent beer) to be had.
Tue 22 November:  Guest House, Union St, Southport, Lancashire Beers, Food, Charity Raffle and Entertainment with Southport Swords.

You can read the Lancashire Day Proclamation here.  All these venues sell real ale, and the Inn Beer Shop has the best bottled beer range for miles.
Posted by Neville Grundy at 3:18 am

Email ThisBlogThis!Share to TwitterShare to FacebookShare to Pinterest
Labels: Lancashire Day, What's on