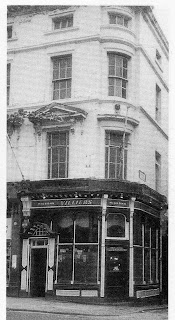 The Villiers was a quaint old pub in Liverpool on the corner of Elliott Street and Market Street.  It was like a local in the city centre, in much the same way that the nearby Globe still is.  It served the excellent original Higson's (brewery closed by Whitbread, like so many others).  I remember its steep stairs down to the gents which became more perilous after a few pints.

The last time I was in there was in May 1985 with my friend Pete (known to beer bloggers as Tandleman).  We had just returned from our union (SCPS) conference in Eastbourne, a 7-day affair in those days that really taxed your stamina, especially with all the keg beer in the hotel bars where most of the union socials took place.  I recall one morning coming down for breakfast in my hotel to see a coterie of Scots who were still drinking around the bar from the social the evening before (I'd hit the sack at around 3.30 am).

Pete and I went into the Villiers for a drink or two before going our separate ways - him in Liverpool and me home to Southport.  Later that year it was demolished to make way for the Clayton Square shopping centre.
Posted by Neville Grundy at 12:48 am

Email ThisBlogThis!Share to TwitterShare to FacebookShare to Pinterest
Labels: nostalgia