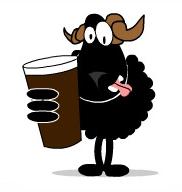 Reading What's Brewing, the CAMRA newspaper, I noticed that in the last financial year, Black Sheep brewery paid almost £7.5 million in alcohol duty, 41% of its entire annual turnover.  No other industry, with the possible exception of tobacco, is similarly hit, but what happened to governments being committed to creating a competitive Britain for the 21st century?  Many pubs and breweries are struggling because of the tax regime; as the government knows this, I can only conclude that they regard pub and brewery closures as a price worth paying.  I don't see why I should pay excessive tax because certain other people believe that the legal product I choose to spend my own money on is a vice.

In the meantime, it's good that Black Sheep are making the point that beer is becoming unaffordable, because for many drinkers it is.  Among the people I know, I can't think of anyone who's given up going to pubs because of the smoking ban, but I do know some who have stopped, or seriously restricted their visits, because of the prices.
Posted by Neville Grundy at 6:05 pm