The dangers of drink 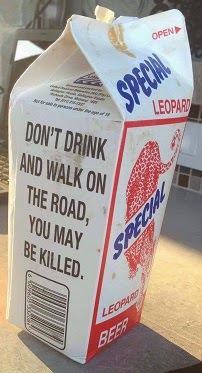 A leopard in is attacking drunken villagers as they stumble home in the dark. It has been reported that the man-eater has killed twelve in the Didihat region of the Kumoan hills in Himalayan India since 2012, with the latest victim being a 44-year-old man.

Madan Panerua, who lives in the area, said: "Villagers are terrorized by the wild animals and it's almost impossible to venture out after dark. Moving from one village to another or to markets through forested area becomes difficult. People carry sticks with them and remain alert all the time. Many in the village believe that drunk people are easy prey.”

Belinda Wright of the Wildlife Protection Society of India said: "Quite frankly, when people are drunk and weave their way back home to the village, they are easy prey. I don't think the leopard is targeting drunk people, just people stumbling along the path at night. I'm sure you won't taste any better because you've consumed liquor."

So it's not an example of feline beer and food matching then.
Posted by Neville Grundy at 6:49 pm