Have you no homes to go to? 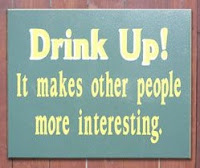 I recently had a conversation with a friend in the pub about drinking up time.

We well recalled the time when you had ten minutes to sup up, a rule that often honoured on the breach rather than observance; for instance, some drinkers might buy double rounds at closing: to stay within the law, they'd have to drink two pints in 10 minutes, and obviously they didn't. Then it became 20 minutes of course, which was rather more sensible.

It was even worse was when I visited Glasgow in December 1972. Although I was quite delighted when I walked around a corner and saw the TARDIS - yes, they still had police boxes in Scotland then - there was another, less welcome, outdated relic from another age that I discovered: the pubs stopped serving at 10.00 pm, with no drinking up time whatsoever. I thought then, quite rightly, that that was an incredibly stupid state of affairs. Subsequently, of course, Scotland led the way in liberating licensing laws.

But now? My friend insisted that by law you still had to stop drinking 20 minutes after the bar closed. I told him I was fairly sure that wasn't the case any more, but I'd check. I subsequently learnt that the Licensing Act of 2003, which came into force in November 2005, made no mention of drinking up time, because the consumption of alcohol itself was no longer considered a "licensable activity" under the Act. However, this doesn't give drinkers licence to tell the staff to get stuffed when they ask you to empty your glasses, because a licensee has the absolute right to take your drink off you and ask you to leave at any time without explanation.

My friend was quite surprised that drinking up time is no longer regulated by law, and that it is up to the individual licensee to decide the rules that apply; I suppose after so many years, some things can seem set in stone. My advice if you're in an unfamiliar pub and are wondering how many drinks to get in at last orders is quite simple: ask. Remember that licensees have every right to take your beer off you if you've overstayed your welcome.
Posted by Neville Grundy at 8:21 pm